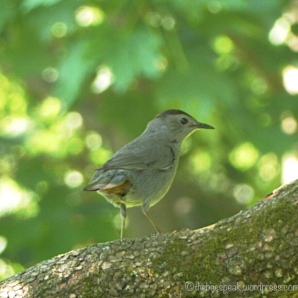 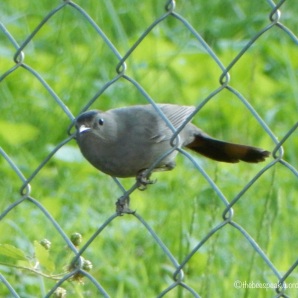 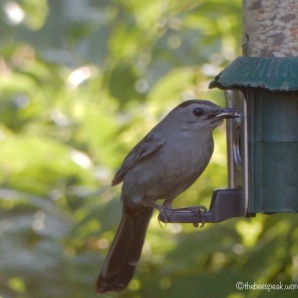 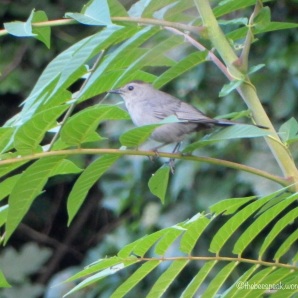 Here is a cool Gray Catbird that comes to my backyard. It really does make a sound that sounds like a cat meow! For the longest time, I only saw a solitary Catbird. However, just this week, I saw two together. My backyard bird menagerie keeps expanding.

I am posting this as my entry to JNW’s One Word Photo Challenge: cat

If you would like to see more bird pictures, click on the birds header any the top of my page. 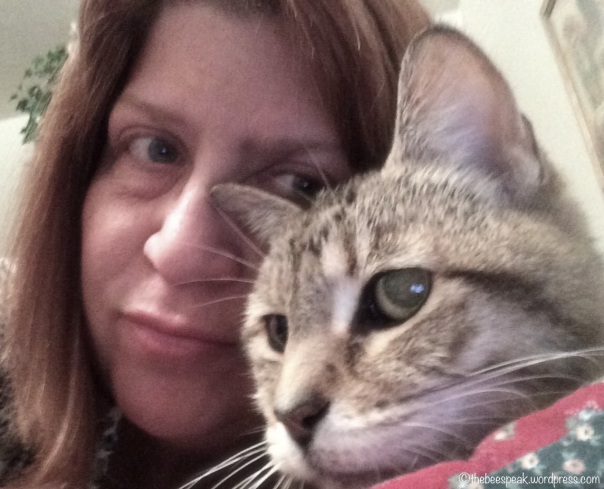 Selfie With My Cat 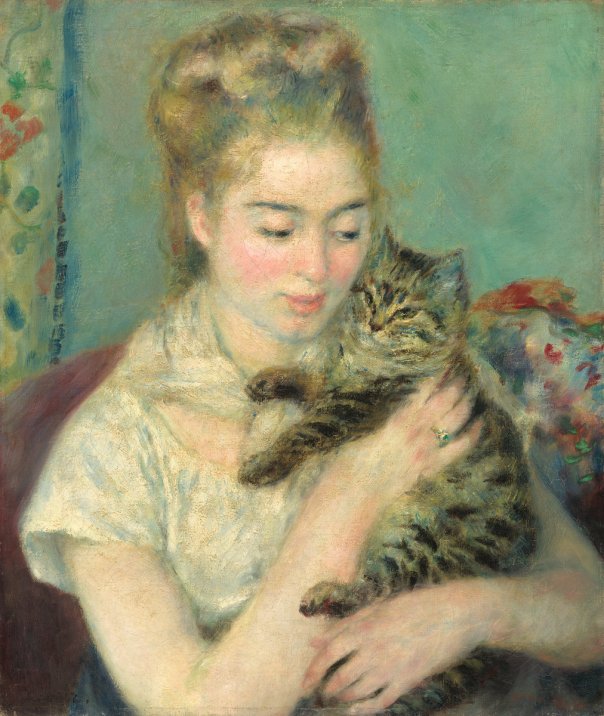 I love visiting the National Gallery of Art in Washington, D.C. I am partial to the impressionists. One of my favorite Renoir paintings, Woman with a Cat, inspired my self portrait. Of course, I am drawn to the painting because I can relate to the subjects!

posted in response to the Daily post photo challenge to find inspiration in a work of art and imitate it:
Life Imitates Art 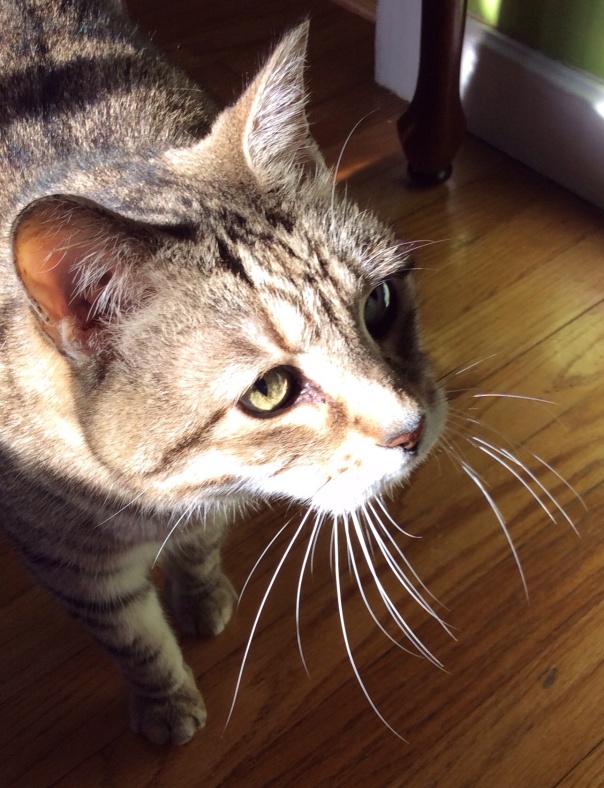 I originally posted this picture Oct. 19 in an attempt to show light refraction. Since the sun did not come out from behind the clouds here all day, I decided to share this photo until I can try to take an outside sunlight shot.

My cat, Stripey, loves to track the sunlight coming through the windows so he can bask in the warmth. The sunshine highlights his handsome face!

Eye of the Tabby-Refraction Photo Challenge

The Object of My Affection-Stripey’s Story 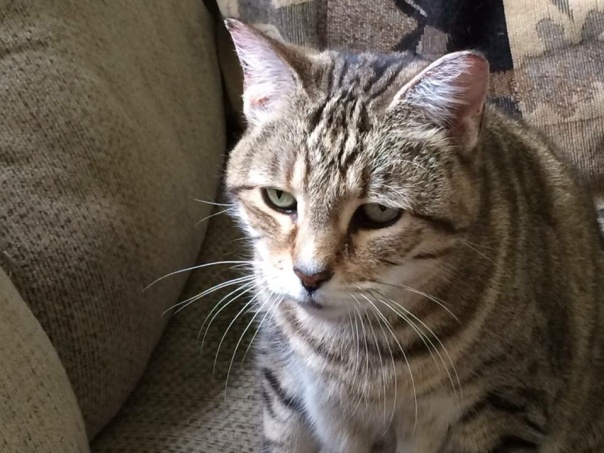 Our final Writing 101 challenge is to write about an object that is our most prized possession.

Stripey Boy is my 16 year old cat. He is more prized to me than any object I possess. His value cannot be measured in price or sentiment. I’m not sure if I own him or if he owns me. He certainly owns my heart.

I have always known Stripey Boy was my cat, even when he didn’t technically belong to me. 16 years ago, my next door neighbor (let’s call her Anna-I really don’t remember her name) moved in with two cats. Before long, those cats started having kittens.

I first saw Stripey when he was only several weeks old. His mother, Little Abbie, came from her secret birthing place with one of her tiny kittens in tow. She was carrying this silver gray tabby kitten by his back leg instead of by the scruff of his neck. She was doing her best to move him to safety. My neighbor, Anna, actually kept the small litter inside for a few weeks before returning them to their outdoor status.

I wasn’t sure if another cat would fit in with my two beloved indoor kitties, Cimba and Patch. So, I kept an eye on Stripey in the great outdoors.

One day, I noticed an older neighbor (let’s call him Mr. Brown) placing a bowl of cat food on his back porch for Stripey. Anna later confirmed that Mr. Brown, with whom she had gotten quite close, had offered to take care of the cat.

Stripey took his meals from Mr. Brown but he stayed around my house looking for attention.

He greeted me each day as I returned home from work, prancing down my sidewalk with his tail straight up in the air. He bumped up against my legs and followed me to the porch. We sat outside together, his whiskers brushing against my hand in request for a scratch of his head, his grey and black striped fur soft to the touch. His bright eyes tracked my every move. He talked to me with meows, squeaks and purrs. I spoke back with words of praise and assurance.

Stripey especially liked to rest in a big flower barrel, empty except for dirt, that was on my front porch. I placed newspapers on top so he wouldn’t get dusty or muddy if rain blew in.

One night, poor Stripey hobbled up my steps and into his barrel. He was holding up his back left leg. His face was puffy and his eyes were distressed with pain. He knew where to come for help.

Since Stripey didn’t technically belong to me, I needed to approach my neighbor to see if I could help take the injured cat to the vet. I didn’t know Mr. Brown very well, really not at all. I hoped he would let me help.

I walked up his front steps, carrying Stripey. “He’s hurt,” I said. “I would be glad to take him to the vet. Would that be okay with you?”

Mr. Brown nodded his head. “That would be good. It’s hard for me to get out and he does need help.” Mr. Brown seemed concerned and relieved. “Go ahead and take him,” he said.

When the vet asked me the name of my cat, I uttered “Stripey Boy, his name is Stripey Boy.” Only later did I learn that the old man had called him TC, which stood for Tiger Cat.

The vet wasn’t certain, but she thought Stripey may have gotten his paw caught in a fence. She needed to keep him several nights for testing and medical care procedures. I kissed him on the top of his head, told him he was loved and promised him I’d be back.

When Stripey was able to leave the animal hospital, he eased back to his normal routine of traveling between the houses. I gave him all his medicine and all the extra attention he craved.

Not long after, Anna decided to move from the neighborhood. She decided she would either find homes for her expanded cat population (spay and neuter had never been on her need to do list, despite my urging and offer of assistance) or take them to the pound.

My mother lives with me and she was sitting on our front porch when Mr. Brown yelled down to her. “I know your daughter likes TC. I can’t take care of him any more and she might want to keep him. Anna needs to know because she is leaving soon.”

My phone rang as I was out shopping with a friend. “Hurry home!” my mother said and she explained the situation.

I arrived home as Anna was putting Little Abbie into her car.

Anna said she was keeping Abbie (which still breaks my heart; my shopping friend was ready to give her a good home.) Stripey Boy was crouched in a crate on the sidewalk, mewing. “Do you want him?” she asked. “I was told you might want him.”

“Yes!” I cried out, releasing my cat from his imprisonment. “Stripey Boy, you are mine. I always knew you were mine.”

Stripey, my pampered indoor house kitty, is a treasured part of my life. He is family. He chose me when he needed help and attention. Circumstances ensured that he would be mine.

My Journey through Still Life Photography

Life is for Living Every Day