Rule of Thirds on Display 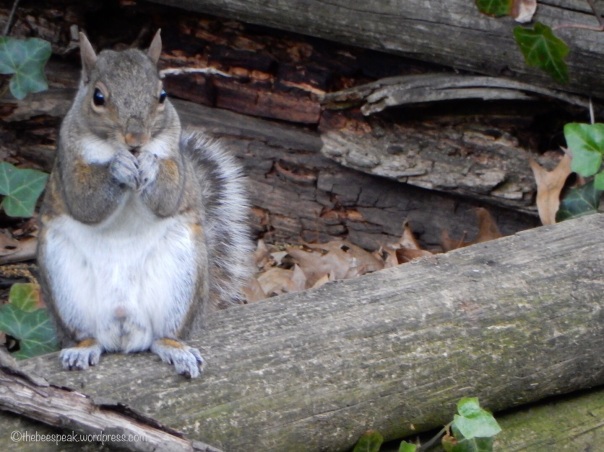 This week, Cee has challenged us to explore the photography Rule of Thirds. The squirrel in my first picture is in the left third of the picture. He may be a bit close to the edge but he is so cute nibbling on his acorn that I think this action shot works.

The next photo is a landscape where the focal point is a water tower at the left of the scene. Your eyes go there first, move to glance at the rest of the photo elements, but are drawn back to the tower again. 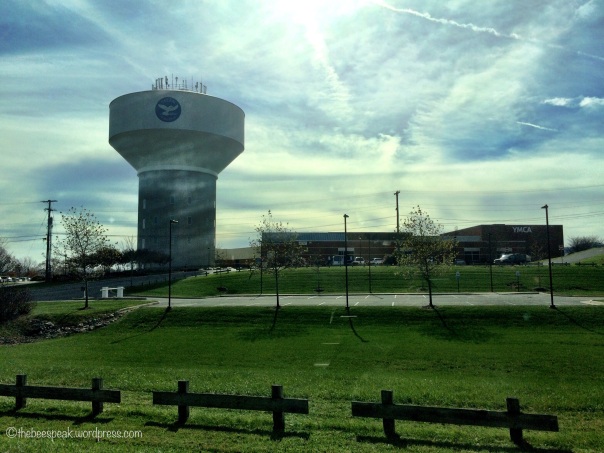 The focal point can also be in the right third as seen in the next two photos. I like the way the steeple is grounded but reaches toward the sky in open space without hindrance. 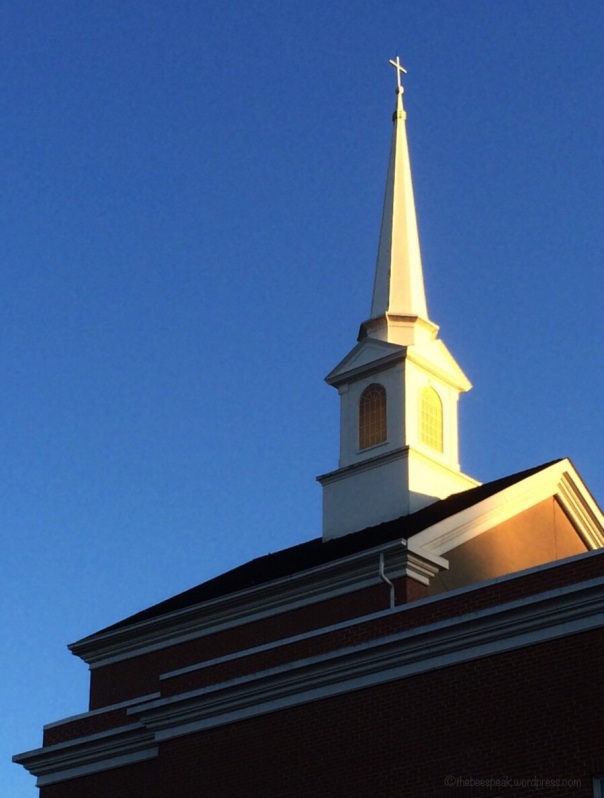 The placement of this tower in the right third of the picture made it look more dramatic than if it was simply in the middle given the slanted hillside. 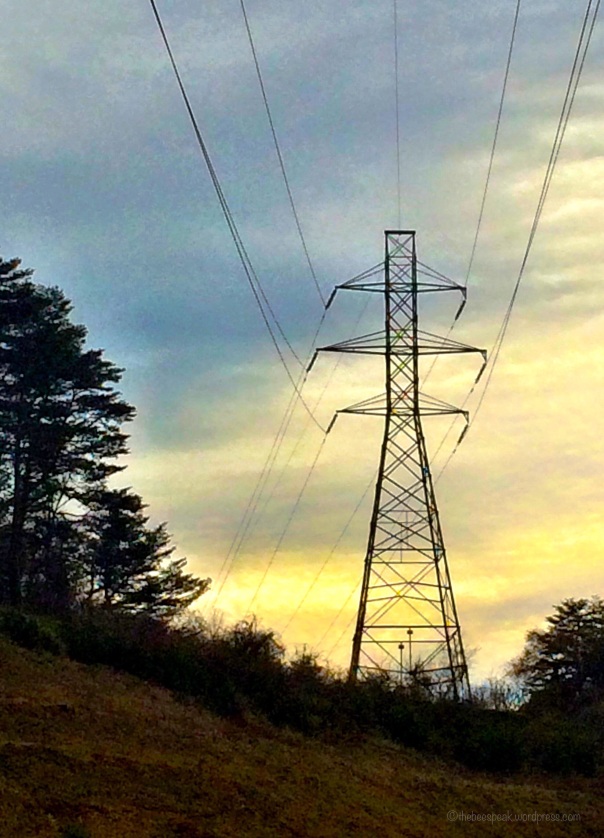 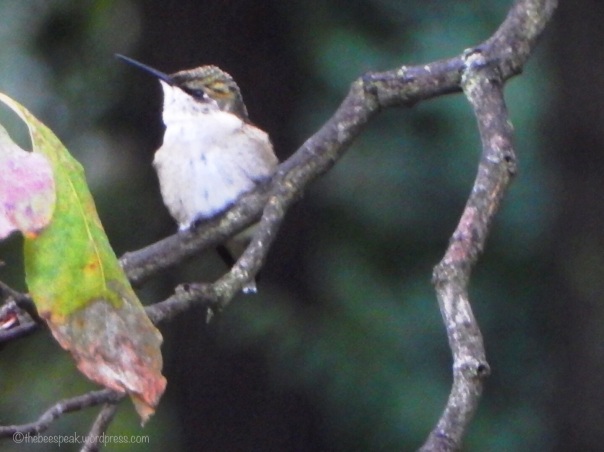 Finally, I selected a photo where the focal point is at the bottom of the photo with simple plants settled in the flower bed. Nothing distracts from the plants and they seem to have room to grow. 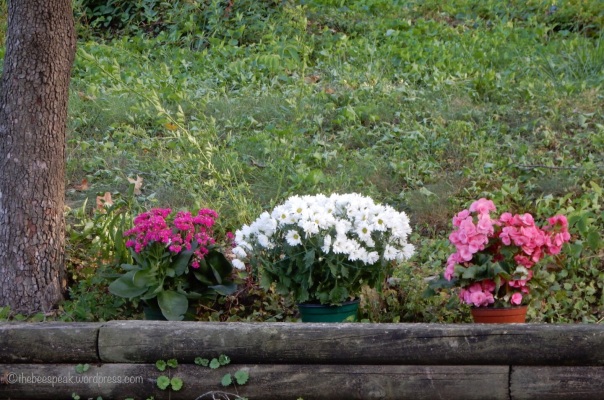 I hadn’t given the concept of upper and lower thirds as much thought as the right and left until this lesson. I also learned to think about where the open space is in relation to the position of the photo subject, and how that may impact someone’s emotional interpretation of the photograph.

These photos are posted for Cee’s Compose Yourself Photo Challenge-Rule of Thirds. Check out her blog for lots of great photo tips and links to example photos! 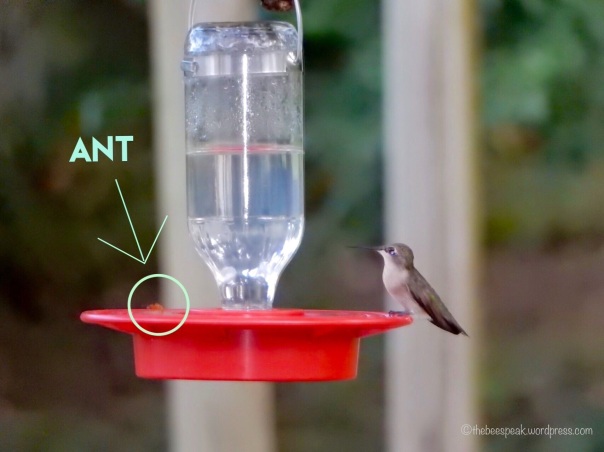 When I saw that the theme for JNW’s One Word Photo Challenge this week was “ant,” I was momentarily stumped. I knew that my options would be limited. I had tried to take a close up of an ant this summer with less than satisfactory results and the photos were deleted. Thanks, or no thanks, to cooler temperatures, there are no ants lurking around. So, what was I to do?

I started scrolling through some pics from the summer when I remembered how I often cropped ants out of my hummingbird pictures. Sure enough, there were a few photos remaining with a tiny ant in the background.

I decided to pinpoint the ant in my photo using the Over App. In reviewing the photo, I decided that it looked like the hummingbird was studying the text identifying the target ant. The bird looks to be a serious student, concentrating intently on the lesson about ants! I do believe that hummingbirds may eat ants although I have not seen it for myself.

I like to think this ant made it safely from the feeder, leaving the hummingbird to his nectar feast! 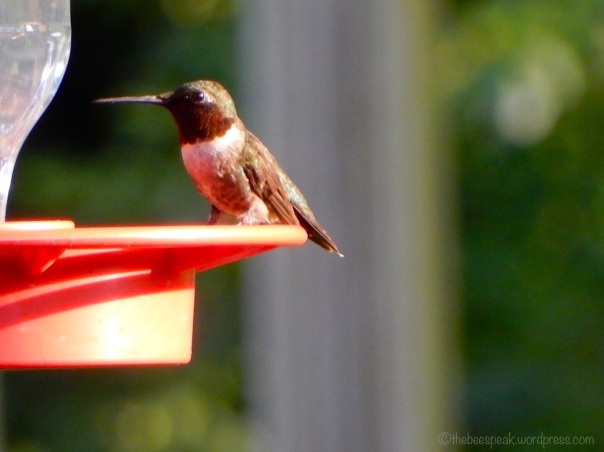 I was pleased to see a male Ruby Throated Hummingbird come by the feeder! I like to think it is the same bird I first saw last year, named “Herman Byrd.” I know that these cool birds do go back to the same place year after year. In my heart, it is Herman.

There is also a little female bird that flutters and hovers around the feeder. I think it is the same tiny bird, creatively named “Tiny”, that showed the same characteristics last year. 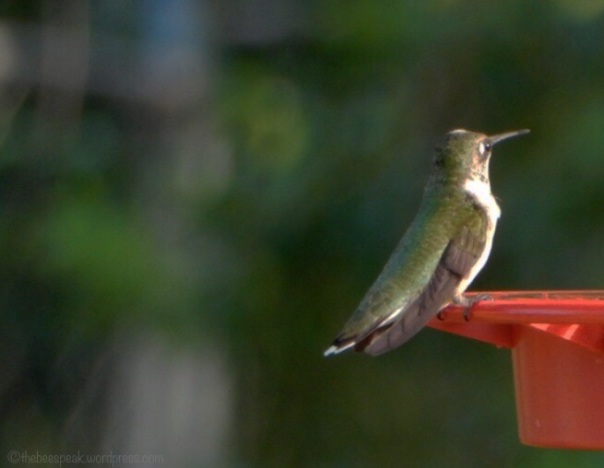 I am obsessed with the fast birds and wish I could take better action pictures! I like these blurry bird photos anyway! 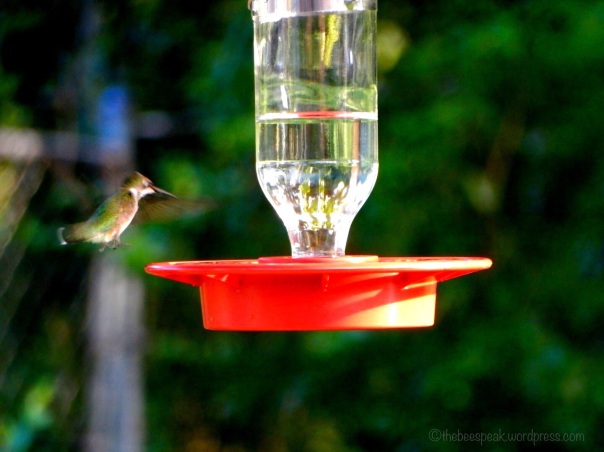 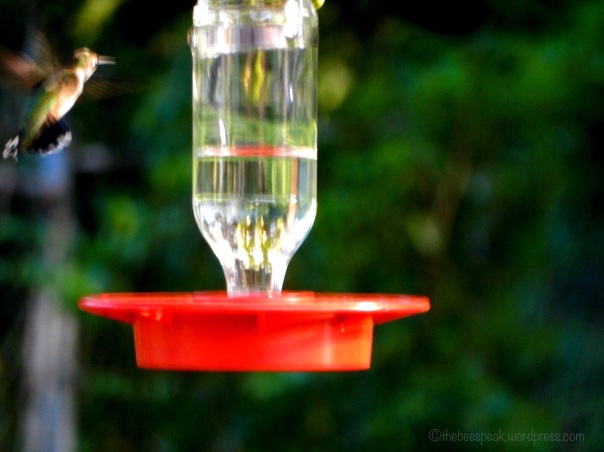 Yesterday, I saw the two birds flying near the feeder at the same time, so I hope I can get a double bird photo too. Wish me luck! 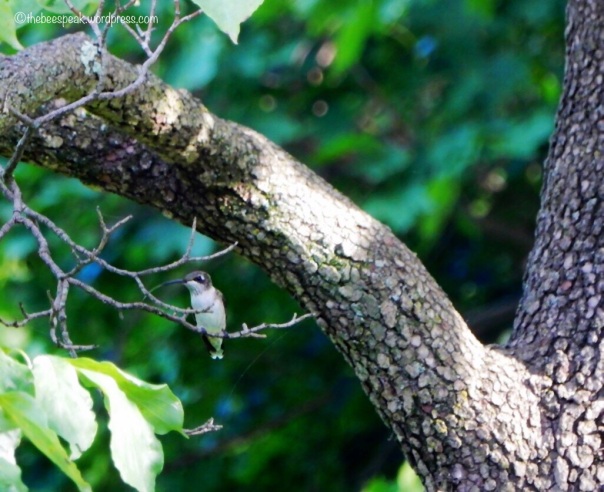 I happened to see my hummingbird resting on a branch just in time to capture its photo. If you look closely you can see its tongue sticking out past its long beak! While it may be a juvenile male bird, I believe this to be a female based on its white tipped, fan shaped tail feathers and white throat. 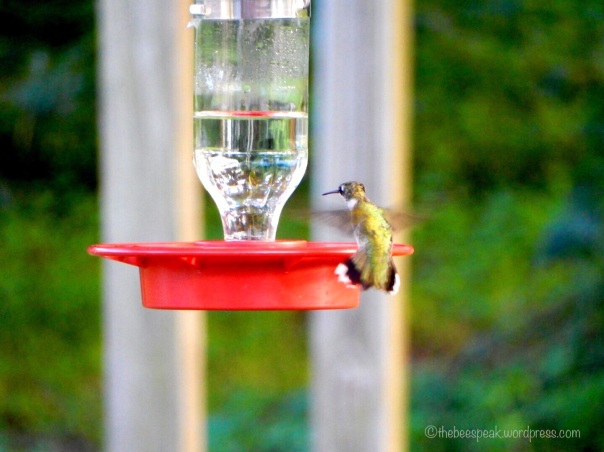 The little bird came by the feeder many times tonight and I am happy to know it makes return visits for nectar. 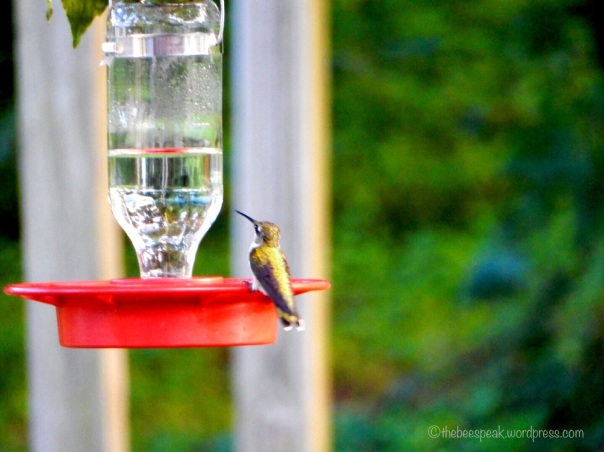 I am feeling snap-happy and will be sure to post more pictures later! I hope you all can appreciate these special birds like I do.

*I like the first picture so much I am entering it into Lucile’s Photo Rehab Clinic. I was ready with camera zoom, cropped the original photo to come in even closer and applied the sunset light feature using camera+. 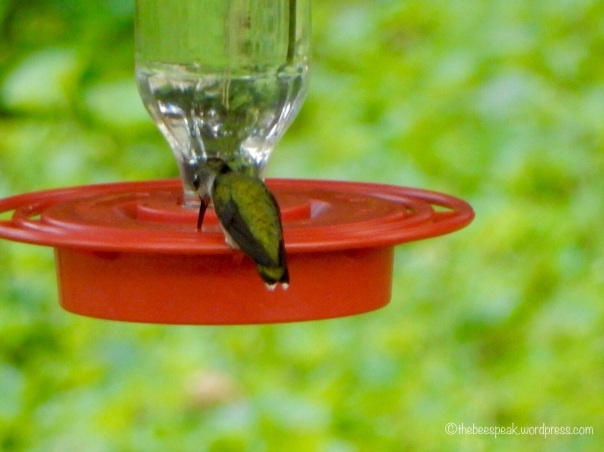 YAY! Finally! I saw the first hummingbird of the season in my backyard last night and when it returned tonight at around the same time, I was ready with my camera!

I had never seen a hummingbird until last year and I fell in love with the little birds! I introduced my blog last August with some of the first posts being about my search for a hummingbird. I watched for the birds each evening, using binoculars for close up views. Seeing the vivid ruby throat was astonishing. I took a picture as proof of my sighting and you can see the very tiny bird image here.

Now, I have a camera with zoom capability, hence this close up picture. I took two blurry pictures and this featured picture before it flew away. In my excitement, I was lucky to get this shot.

I remain amazed at the beauty of the little birds. Hopefully, I will be able to capture some more pictures, including the glorious ruby throated male. Let the summer viewing begin!

(I am also posting this into Lucile’s Photo Rehab Clinic as my best hummingbird photo yet!) 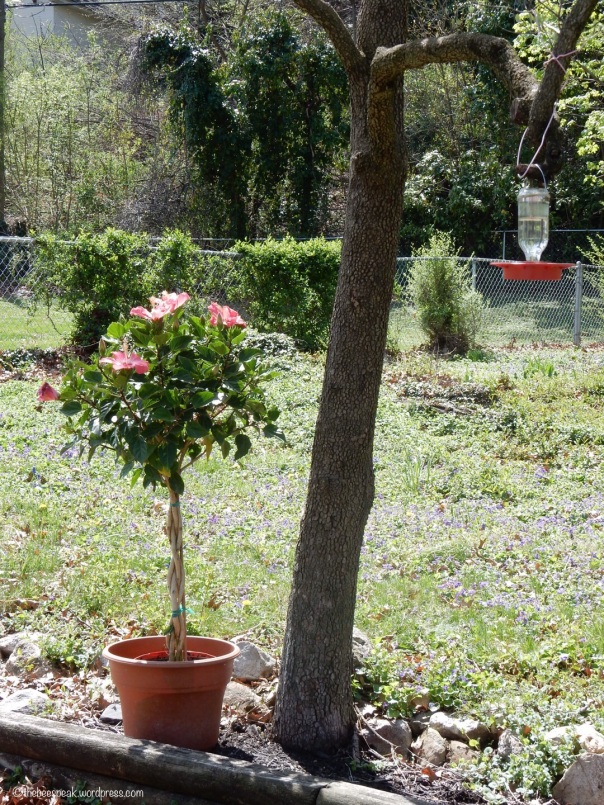 Last August, I decided to hang a hummingbird feeder in my backyard. It was late in the season, but I had never seen a hummingbird, and I was hopeful that I would finally see one.

To my amazement, a tiny bird arrived the very next day! Trust me when I say I was thrilled to see him. Binocular views showed him to be a male ruby throated hummingbird. He was beautiful. I named him Herman. Several birds, including females, hovered around the feeder until it was time to migrate south.

I was excited to get photographic evidence of my very first sighting using my i phone. But without a zoom, I was only able to catch a very tiny silhouette of Herman. This year, I am ready; I have a camera that can zoom up closer to the feeder now.

Sugar-water nectar is in the hanging feeder and I even bought a painted lady hibiscus to welcome Herman home. There has already been a hummingbird sighting reported in my town. I continue to watch and wait. Maybe today will be the day! 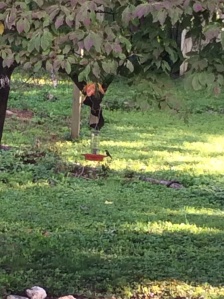 I wanted to see a hummingbird so much that I actually placed it on my bucket list. I hoped it would finally happen, and it did!

I was standing at my back door, staring intently at the feeder. “A watched pot never boils” kept running through my head, but I couldn’t look away. Suddenly, I saw the tiny bird zoom in and hover at the feeder. “I saw one! I saw one!” I shouted in amazement. And just as fast, he flew away. I worried that he had been scared away by my loud pronouncement of his sighting. 5:51. 8/18 at 5:51. The numbers floated in my head as I continued the watch. Then, there he was again. Three times I saw the little bird pose at the feeder. I was amazed to see it with my own eyes.

Each new sighting brought me a moment of joy! Now, I am a bird watcher. 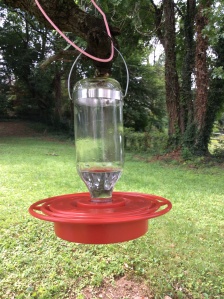 I am the only person I know that has never seen a hummingbird. Hard to believe, I know. But it is true. Last night I hung a hummingbird feeder in my backyard, hoping for a little ruby throated visitor. I filled it with sweet sugar-water nectar for the little birds.

So far, no birds. However, I realize it may be a little late in the season. I still have hope it may attract a bird or two! Maybe a straggler on its migration south will stop by and then come around again next year. I am on a hummingbird watch and I remain hopeful!

capturing memories one moment at a time

My Journey through Still Life Photography