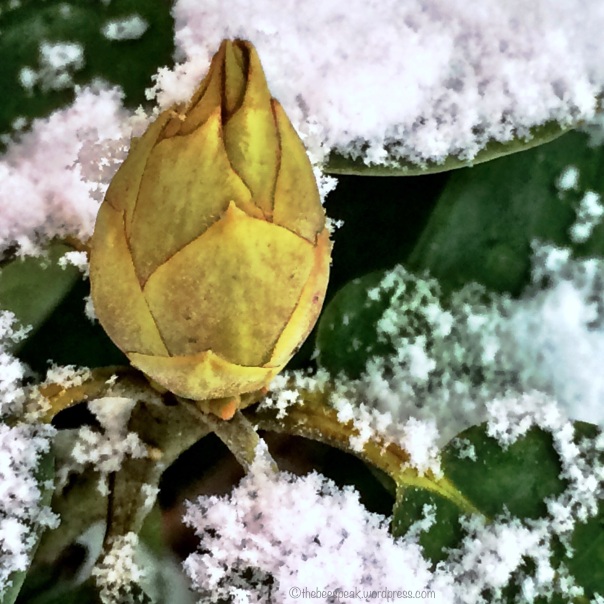 The calendar year is drawing to a close and I am looking forward to 2017. I enjoyed Cardinal Guzman’s Changing Seasons photo challenge again this year, and I’m glad he decided to continue hosting it again next year. There are several ways to participate, you can choose whichever version you like. Here is my 2016 gallery collection. 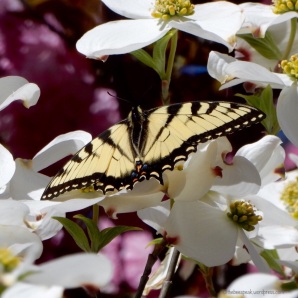 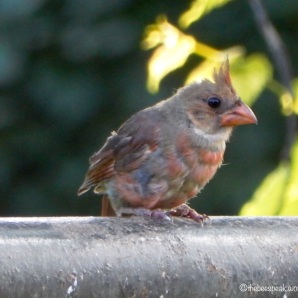 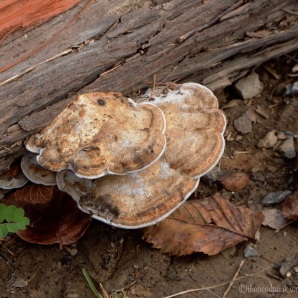 This year, I mostly did V2 which, for me, was posting a single picture representing the month. Personally, I also chose to add a haiku with each picture because I like the poetic form and picture pairing! If you care to see my full posts, you can click on the changing seasons header at the top of my page.

I wish you all a wonderful and Happy New Year! 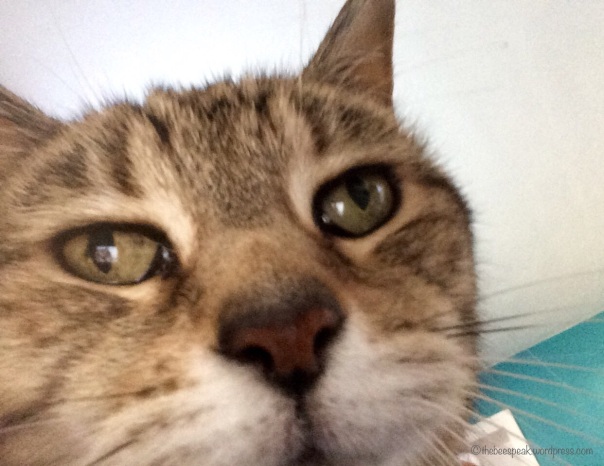 Look at my sweet Stripey’s eyes!

Not too long ago, I noticed that my cat didn’t seem to be able to see the way he usually did. I wondered if he had suddenly lost his sight because of a kitty stroke. I hoped it would get better, but soon he couldn’t see at all and I called his vet.

Poor little Stripey was resilient. He just walked slowly and close to the walls and found his way around my house. He could find his food, water and litter box from memory. I made sure not to move anything around so as not to confuse him. It was hard to guide him because, at 18 years old, Stripey’s hearing was already diminished. If I pounded on the floor and called his name, he would sometimes turn toward the vibration. I tried not to startle him, but still tried to comfort him by sitting near. He would sit close and even sit on my lap. The saddest thing was that he couldn’t look at me! I really missed the eye contact. His pupils stayed dark and large. My heart was breaking for him, but he just carried on and adapted.

By the time of Stripey’s vet appointment, I had been already been trying to find answers by googling his symptoms. Turns out that a cat can go blind from detached retinas if his blood pressure is too high. I read that there was a possibility of restored vision if blood pressure medication was started soon enough.

The mobile vet confirmed that my cat’s blood pressure was too high. He was started on blood pressure medicine. But, I wondered, was it in time? Another week later, he still couldn’t see, and while his blood pressure was better, it was still too high. So, the vet increased his medicine dosage, which did improve his vital measurements. I was cautiously hopeful.

I prayed and prayed for a miracle. I thought he seemed to be seeing a little, but wondered if it was my imagination. I kept praying. I gave him his medicine every day by applying a compounded cream on the tip of his inner ear. I prayed that with lowered blood pressure, the fluid behind his eyes would go away so that his retinas could reattach. I worried that it was too late. I prayed some more.

One day, I was holding Stripey on my lap and I noticed his eyes. The pupils were constricting in the light! I excitedly took this picture to document the moment I knew he could see light.

I started to notice that Stripey wasn’t hugging the walls when he walked through my rooms. He moved a little faster. And, one day, he looked up into my eyes and I knew he saw me! My prayers were answered! I was so happy! After five weeks, my beloved Stripey could see again.

So, keep this in mind, especially if your cat has a sudden change in vision, and make sure to see your vet. I had no idea that a cat could have high blood pressure and need blood pressure medicine. Did you? 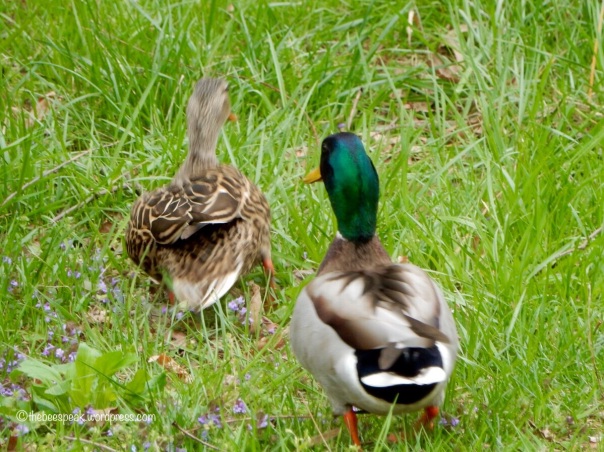 These two Mallard ducks were hanging around a creek when I spotted them. I didn’t mean to bother them, but they got up and walked back toward the water when I got closer than they liked. There was no goose in sight.

I remember playing the childhood game called duck, duck, goose. We sat in a circle and someone walked around the outside of the circle tapping us on the head as they said “duck, duck, goose.” The person tapped as goose had to chase the tapper around the circle, trying to catch them before they took over the empty spot. Seems like it would be hard to jump up and actually catch the tapper but I guess we sometimes did or the game wouldn’t have been fun to play. Is this how you remember the game?

I am posting this for Cee’s Fun Foto Challenge this week with the theme of Duck Duck Goose!

It is Christmas Eve and Santa must be loading up his sleigh. Santa Claus is coming to town. When I was a kid, I could easily think of something to wish for and eagerly awaited Christmas morning. I was a lucky kid and always had a bounty of presents from Santa.

It was exciting to go into the living room and see all the amazing things that Santa had left. Santa did not wrap our gifts, so it was like a visual explosion of sights , and we were thrilled as we wondered what to look at first!

I realize how very lucky I was. Lots of love filled the room.

I wish you all a Merry Christmas filled with love and joy!

Along the Peaceful Path

Here is a literal view of a park path that I often take. I like to walk in the park on weekends. It’s an easy walk. I just stroll and take in all the sights and sounds of nature. The birds chirp and the creek babbles. The foliage along the creek changes according to the seasons. On the day of this photo, I was surprised to see pretty woodland sunflowers along the path. They seemed to have bloomed without notice and seemed like a gift!

I stay on the lookout for peaceful paths all year, paths removed from the tiring pace and common stresses of the world. I keep coming back to this same path. While it’s familiarity gives me comfort, I can also be pleasantly surprised to spot new birds and flowers along the way. Obviously, I like to take my camera along and take pictures of the sights.

Robin above the Creek

This year, I discovered the real joy of birdwatching. I never understood the appeal until I took the time to notice all the special details (which continue to amaze me) of the different birds that I saw! I took lots of bird pictures, in the park and in my backyard, and shared some on my blog. You can click on the birds header at the top of the page to see pictures. I still have more to post when I get a chance. And, I plan to stay a birder in 2017. Birdwatching has been added to my list of interests, along with nature strolls, photography and blogging!

I hope to develop new interests in 2017 that bring me peace and joy! Positive suggestions welcome! Happy 2017! 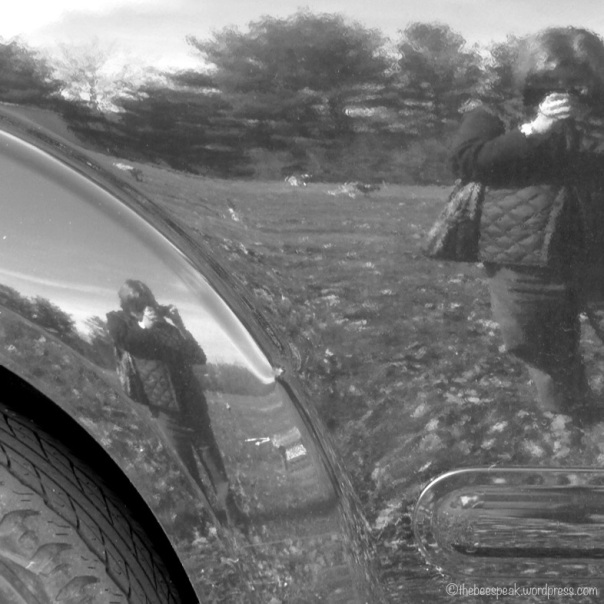 Yep, this is me. Or, at least reflections of me! Both the shiny vehicle door and the curve above the wheel well turned out to be mirrors for my dual image self portrait.

Weary but hopeful
December will settle in
Washed in winter white

***
I need to say that I prefer the decorative coating of winter white in this photo to any wintry white mix of precipitation! I am not wishing for, I dare not even say it, s-n-o-w! A mild winter would be fine by me. It seems hard to believe that December is here, and now nearly gone. This month has been tiring, and I am ready for some energizing rest and holiday cheer. Merry Christmas and Happy Holidays to you all!

***
This is my Version 2 entry into Cardinal Guzman’s Changing Seasons Challenge. Check out his blog for other interpretations of the theme and think about joining us in the photo challenge! I am pleased that the Cardinal will keep hosting my favorite challenge in 2017! You can see my previous entries by clicking on the Changing Seasons header at the top of my page.

A redbud sapling
Grows in anticipation
Of maturity

***Her blog bespoke of her appreciation of the simple things in life.***

When I saw that bespoke was the daily prompt, I had to respond since my blog is called the beespeak! I hope that my appreciation of the simple things in life is evident when you look at my blog posts, many of which feature nature photographs. Of course, simple is a relative term, right? While simple in comparison to more fancy, expensive things, it is undeniable that trees and creeks and birds and flowers are exquisite in their beauty.

These simple rough woodland sunflowers, reaching toward the sky, made me happy. And it made me smile to see the little bee buzzing around them!

What simple things make you happy?

***
As we move toward the new year, I am learning to recognize the depth of my connections.

The surface connections are easy to see. It is the deeper layers of connection that are on my mind. How does it all work together? Can growing in appreciation of all these complex bonds make me more grounded, understanding, optimistic, peaceful, loving, and kind? Can it make me a better human, friend, sister, and child of God? I think it can. I believe it will.

capturing memories one moment at a time